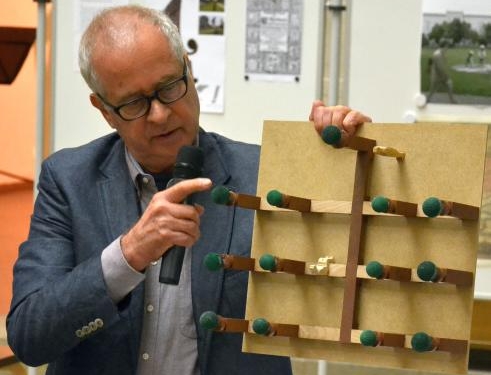 A “Monument to Magdeburg Law” (Пам’ятник Магдебурзькому праву) has stood on the banks of the Dnieper in Podil, a district in the Ukrainian capital of Kiev, since 1808. This was the place where the city council convened once Magdeburg law had been conferred on Kiev. Smaller and larger monuments have been erected in many other Eastern European cities as well. The mother city of all places does not have one, though.

Civically active residents of Magdeburg established the nonprofit association “Denkmal Magdeburger Recht e.V.” in 2011 with the intention of changing this. They are being supported by an artistic advisory board. Current Mayor of Magdeburg Dr. Lutz Trümper is the association’s patron.

A competition was created in order to realize this project, and five international artists were commissioned to design models of a monument, which were presented at the Kulturhistorisches Museum Magdeburg in October of 2014. The winning design by Claus Bury (Frankfurt a. M.) will be erected in the city on the Elbe.